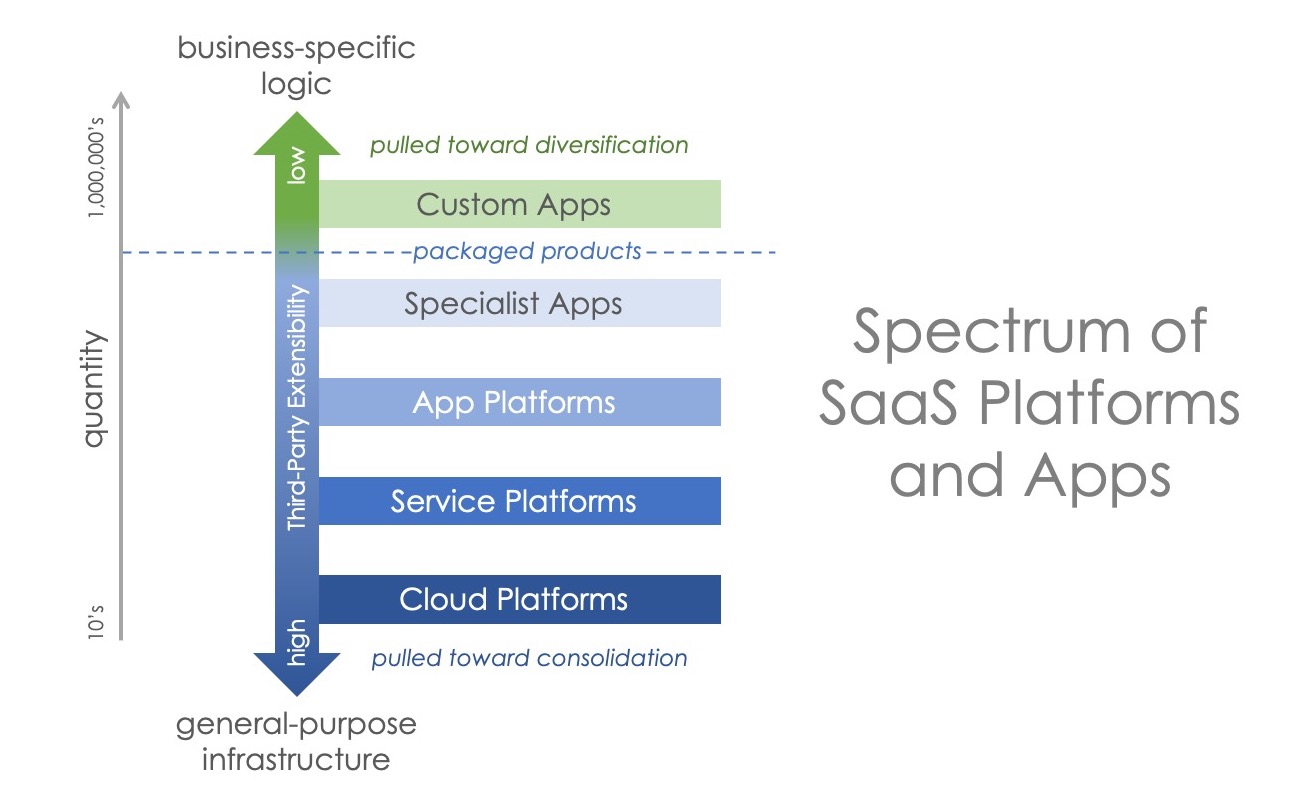 Last month, I published the latest marketing technology landscape. It grew yet again, defying many a pundit’s prior prediction, swelling to 8,000 martech solutions.

The irony of those two competing narratives flooding my inbox at the same time — which I’ve witnessed every year for the past decade in nearly parodied Groundhog Day fashion — never ceases to leave me shaking my head in wonder.

While the arguments for consolidation make sense on a lot of levels, the empirical evidence to the contrary — at least with regard to the total number of apps in the market — is undeniable. Something else is happening.

But what exactly is that something else?

I’ve drawn it as a long tail. I’ve illustrated it as an oscillating wave of expansion and contraction soaring upward on the back of a much larger wave of continuous software growth. One year, I even mapped out a giant system dynamics causal loop diagram to show all the forces pulling and pushing on each other in this market.

Each of those visualizations provided a lens on the martech industry. But I think I have a better one to explain both the “what” and the “why” of the simultaneous expansion and consolidation in marketing technology — a paradox we’ve wrestled with for the past decade, and one that I anticipate will continue in the decade ahead.

The Relationships Between Platforms and Apps Explain Everything 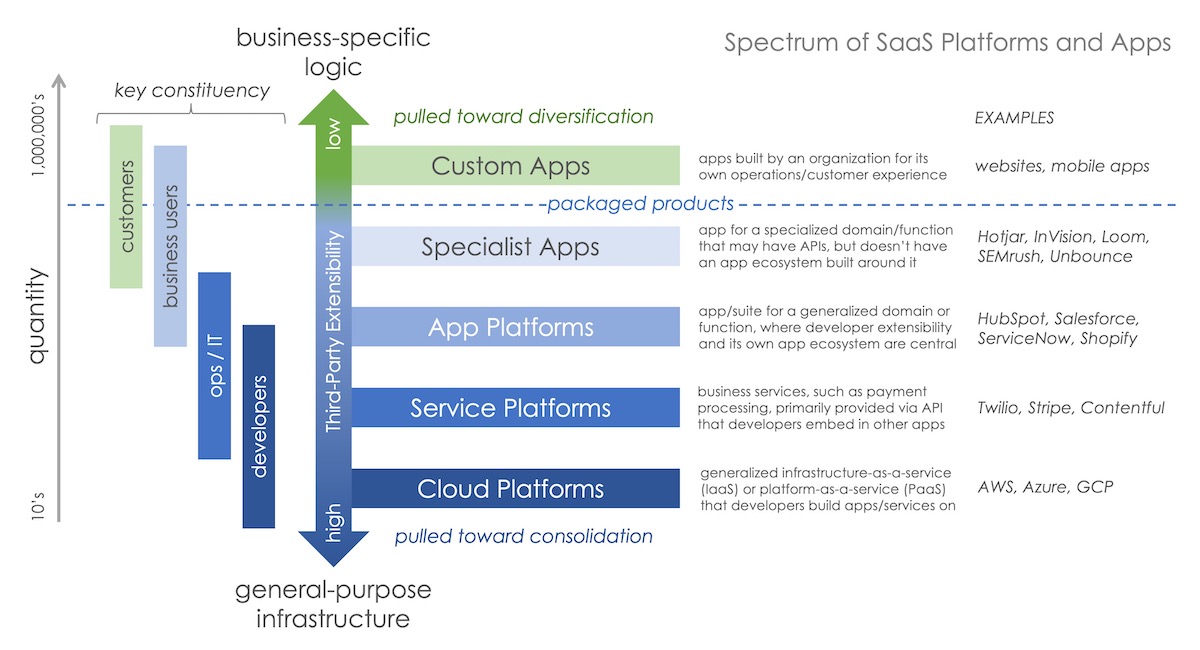 Structure determines behavior. Or perhaps the other way around. Certainly the structure of the modern software industry helps explain the behavior we see in martech and other SaaS markets.

The above chart illustrates the spectrum of cloud-based platforms and apps, from the bottom up. Three attributes are remarkably aligned across this spectrum, and not coincidentally:

This is how the modern software industry is structured. Pretty much everything is “in the cloud” — software-as-a-service (SaaS) — even if bits and pieces also run on “the edge” on our laptops, mobile phones, or connected appliances.

Cloud platforms, such as AWS, Azure, Google Cloud Platform, etc., are the foundational layer underpinning all software in the cloud. They started as infrastructure-as-a-service (IaaS) — providing raw, if virtualized, computing machinery on demand. They evolved into platform-as-a-service (PaaS), insulating developers entirely from the antiquated concepts of hardware. Today, you write software on these cloud platforms, and it just runs, without any care about the mechanics hidden below. AWS Lambda — “serverless compute” — is the quintessential example of this. There are two important things about these cloud platforms:

From that cloud platform foundation, we go up the spectrum to higher-level and more specific software technology, with each layer enabling others above it to stand on their shoulders: Is It an App or a Platform?

The word “platform” is highly overloaded. Many software products are called platforms these days. If you simply mean they are extensible or they are a factory for generating specialized assets — e.g., a landing page creation platform — that’s a perfectly fine use of the word.

However, in the spectrum of SaaS platforms and apps described here, the word “platform” has a concrete, quantifiable meaning:

A platform feeds the creation of more apps than it absorbs through consolidation.

In the see-saw illustration above, platforms are low on the left side of the fulcrum, where consolidation dominates, while apps are high on the right side, lifted into large quantities by those platforms that have enabled them.

The “paradox” of consolidation and expansion, in martech and in SaaS more generally, is then simply explained by math: platforms consolidate while spawning more apps than they remove. The net number of apps in the world grows, even while there is intense competition driving consolidation further down in the spectrum.

One of the key ways platforms compete with each other? By fighting to enable more apps than their competitors. Think about that:

The more intense the competition is between platforms, driving their own consolidation, the more apps they help to create (in the layers above).

Cloud platforms and service platforms leverage app creation the most. That is their whole raison d’être. However, app platforms play a special role by facilitating the discovery and integration of apps within their particular domain. With so many apps in the world, that’s a highly valuable function to enable businesses to effectively harness the power of all these apps.

The 4 layers of app platform integration that I mapped out last year describes how an app platform can create cohesion within its ecosystem — making it easier for platform users to harness the innovation of a wide variety of specialist apps. Again, the laws of economics apply: by making it easier for platform users to adopt specialist apps and unlock value from them, they adopt more of them. In turn, this incentivizes more entrepreneurs to create more specialist apps.

While there are eventually diminishing returns in new app creation, most app platforms today are still early in their evolution. As their app discovery and integration capabilities advance, I expect there will be room for many more apps within many of these ecosystems.

Key Dynamics of Apps and Platforms Crossing the Spectrum

What makes things interesting is that positions within this spectrum are not necessarily fixed. Cloud platforms go up to offer more specialized services and capture more value-add. (At the lowest layer, the general-purpose infrastructure of cloud platforms is often commoditized.) You can observe this push upward by browsing the hundreds of services that AWS now offers.

In fact, cloud platforms and service platforms may continue rising into the app platform layer. You can somewhat see this with solutions such as Amazon AppFlow and Amazon Pinpoint.

This difference affects everything: brand, business model, pricing and packaging, marketing and sales, education and enablement, and the very experience of using the platform itself.

It’s hard to serve both markets well — although not impossible. Hybrid technical/business ops and IT professionals, such as our beloved marketing technologists, can help span these two segments of the spectrum.

Where we more regularly hear of cross-spectrum competition and consolidation is between specialist apps and app platforms.

Relationships between app platforms and most of the specialist apps in their ecosystem are usually complementary and mutually beneficial. They have to be in order for an app platform to be successful as a platform. (See How to Build a SaaS Platform Third-Party Developers Will Love.)

However, it’s not uncommon to have some degree of “coopetition” in a platform ecosystem. Successful specialist apps, especially in later stages of their growth, may expand to become platforms themselves to increase their scale. And in the other direction, app platforms tend to absorb some specialist app capabilities over time, either through acquisition or simply the organic evolution of their own products to keep pace with customer expectations.

The lines can get blurry, as we certainly see in the martech space. A specialist app in one app platform’s domain might be a full app platform of its own in a different domain. And, yes, you can have app platforms built on top of other app platforms. (I think Douglas Hofstadter would appreciate that imagery.)

The cross-spectrum shift I see happening most frequently, however, is the migration of custom apps — built for one company’s own use — into packaged specialist apps that are then sold to others. There are two main flavors of this:

Turning a custom app into a specialist app business is not easy. It’s a different business model, often with very different operational dynamics than the original business that created it. I’ve labeled this as a “commercialization chasm” that shouldn’t be traversed lightly.

So why does this shift happen so frequently? It’s the result of a huge pool of millions of custom apps. Even if only a small fraction attempt commercialization and the probabilities of success are low, the absolute number of specialist apps being launched through this process is large.

As the world becomes more and more digital — “digital transformation,” buzzword that it is, is still early in its journey — these leaps from custom apps to packaged specialist apps will only increase. I expect by orders of magnitude over the decade ahead.

The Platform/App Spectrum Is a Long Tail To close this full circle, we can map this app/platform spectrum to the long tail graph that I’ve drawn many times before to show the distribution of scale across the martech landscape. Two truths clearly co-exist in martech and SaaS in general:

It’s not a paradox. It’s the very structure of business in the cloud.