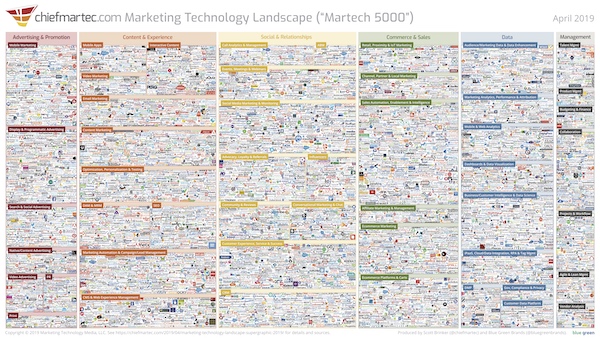 It has become an annual tradition at our spring MarTech conference to release an updated version of maybe the most infamous slide in marketing: the marketing technology landscape. We’re keeping that custom alive this year again.

What a crazy graphic! We nicknamed it the “Martech 5000” a couple of years ago. While I like the ring of that — kinda rhymes with the Fortune 500 and the Inc. 5000 — it’s a misnomer. Last year’s landscape already exceeded 6,829 solutions.

We’re now up to 7,040 solutions on the 2019 Marketing Technology Landscape Supergraphic.

For perspective, here’s the growth of this project over the past 8 years: More importantly, for this year, you can get a free Excel spreadsheet of all 7,040 solutions plus a super hi-res PDF version of the graphic (100MB) — suitable for printing wall-sized, if you’re so inclined — in exchange for giving me permission to email you about new content and events I’m doing. 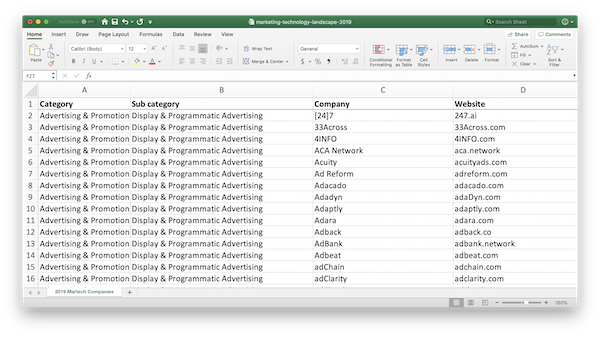 A few important notes, and then I’ll provide some initial color commentary:

Have we reached “peak martech?” (gasp)

Ever since I started this project, the martech landscape has grown year-over-year by double or, originally, triple digits. The 2017 edition had 39% more solutions than 2016. The 2018 one had 27% more than 2017. Its growth has been slowing, a kind of law of large numbers inevitability. But when you’re talking thousands of solutions, double-digit growth is still pretty massive.

That’s not so much a slowing down as a flattening out, a plateau. At face value, it would seem that, indeed, we have achieved “peak martech.” (pause for dramatic effect)

Now, for those industry consolidation hawks who have been heckling me for the past 8 years, you might be tempted to declare victory at this moment. “Ah, ha — I told you so, Brinker!” But before rolling out your editorial parade, you might want to take a couple of things into consideration:

See, there is a limit to how much time is reasonable to invest in producing this graphic. One could argue that I should have hit that limit several editions ago. But this year, having 9 people working on it for 3-4 months was as much as even I could justify (or afford).

Martech Beyond the Martech Landscape

These are five buckets of martech apps that are not fully represented on my landscape:

Starting with regional martech apps, I’ve been amazed over the past couple of years by the number of people who have created “national martech maps” for different countries, charting all — or as many as they can find — marketing technology companies headquartered there.

Since I’ve been so impressed with these, I’m embarrassed to say that we didn’t think to cross-reference this when we were assembling our global landscape this year until after it was off to press. We missed hundreds of regional martech companies. And that’s just considering the handful from countries with a published landscape.

Similarly, while we’ve certainly incorporated many vertical industry martech apps into our landscape, we know we’ve barely scratched the surface of what’s out there — companies like LabWorthy in the dental industry or ChurchCRM, neither of which are on our landscape. Just finding these companies, without going deep in every industry ourselves, is a Herculean task.

But where things get particularly interesting to me is the explosion of martech apps that are a result of the 3 trends driving the Second Golden Age of Martech. (You can read that article, or you can also watch this 40-minute talk of mine.)

Each of these trends — the growth of platform ecosystems, the blending of software and services businesses, and the rise of citizen developer platforms — are birthing whole new galaxies of martech apps.

The major marketing suites have all embraced becoming true marketing platforms, with ever more open APIs and official marketplaces for third-party apps. Here are just a few of these martech ecosystem marketplaces, each with hundreds of apps:

While many of the products listed in these ecosystem marketplaces are included on our marketing technology landscape — primarily those that operate across multiple marketing platforms — there’s a growing number that are uniquely built for an individual platform’s ecosystem. They aren’t as easy to discover outside of those ecosystems, but within them, they can be apps greatly loved by those communities. And some of those communities are quite large.

As one example, check out OrgChartHub, a product built specifically for HubSpot’s platform.

For the extreme end of the ecosystem app spectrum, consider the fact that WordPress has more than 54,000 plugins that have been created for it. Each of these plugins is a kind of mini martech app. (Some of them actually have quite a bit of scale.)

I have no idea exactly how many of these aren’t on our marketing technology landscape, but mathematically, I know it’s more than 47,840.

Now, I’m not saying all these martech apps and platforms are equal. There are many orders of magnitude difference in scale between a major marketing platform company like Adobe and a WordPress plug-in such as Social Warfare.

That’s not a knock against Social Warfare by any means. In fact, I just installed them on this blog, and I absolutely love their product. They don’t need to be a $120 billion public company to delight me as a customer.

But all along this continuum, useful martech apps are thriving. In context, each has value and purpose — however broad or niche — to the marketers they serve. Indeed, this is one of the most compelling arguments for major marketing platforms to embrace an open ecosystem strategy: the splendid diversity of specialized apps that can flourish on that foundation.

The blending of software and services business models is another rich source of martech apps that we’ve had a hard time cataloguing. Major consulting firms such as Deloitte, Accenture, and PwC all have their own martech products now, lending credibility to the model. But a large number of services-developed martech apps are emerging out of smaller firms too.

Blue Green, who produced this year’s landscape, is a great example with their Blue Green Analytics product. Their experience with conversion optimization engagements as a services company helped them identify a gap in the martech tool universe that they could uniquely fill. And because it plugs in to major marketing platforms, it’s easy for customers to adopt.

Finally, there’s the category of “citizen martech” — apps that non-programmers can create using low-code or no-code platforms. Airtable is one of my favorite: if you can work with a spreadsheet, you can build a martech app. Seriously.

This democratization of development in marketing technology dramatically expands the number of people who can create martech apps. As a result, a lot more martech apps are produced — even if they’re relatively small and serve a highly specialized function.

Now, you might be saying, “Yeah, Scott, but those are just little custom apps built for use within a single organization. They’re not apps available to other marketers.”

Ah, but not so fast. Because many of these low-code and no-code platforms have now created marketplaces where users can contribute — and in some cases sell — their apps to others. A great example is the Airtable Universe: The long, long tail of martech apps just got even longer.

A Representative Sample of the Marketing Technology Industry

So, I think we can safely say we’re not at “peak martech” — even if, at least for this year, we’ve reached peak martech landscape.

The truth is that marketing and marketing technology are changing. The challenges of trying to chart all these different martech apps — and running into philosophical debates about what qualifies as an “app” in a world of tens of thousands of pieces of software that could each claim to belong in that collection — is actually a pretty good reflection of the underlying evolution of software in general. While individual categories on the marketing technology landscape — and the larger vendors operating within each of them — continue to jockey between expansion and consolidation, all of this is happening against a backdrop of ever more apps, platforms, components, and services steadily expanding for the foreseeable future.

So this year’s marketing technology landscape is less complete than ever. But still hopefully a visceral representation of just how expansive and varied the field of martech software is.